Heroes to the rescue as QLD battles fire and drought 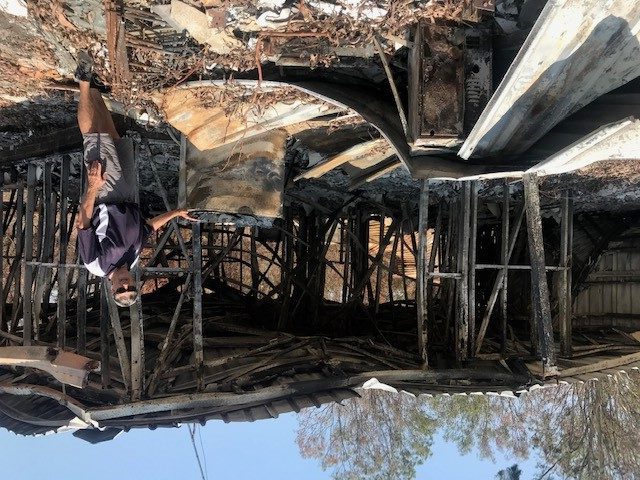 “Vinnies” distributed $76,000 to people affected by drought and bushfire since October through its ‘Always There – Vinnies QLD Disaster Appeal’, but calls for help continued to grow.

In Yeppoon, Vinnies volunteer Rick Williams has worked tirelessly for his desperate community after intense bushfires ripped through the district.

Mr Williams said much of his work as a Vinnies’ volunteer was helping stoic locals re-connect vital services so they could return to “normal life”. “Most of the money we are giving is going to get power and water back on,” Mr Williams said.

“Even if a home survived, the water tanks have melted, the pumps are destroyed, the electricity’s down. People lost their vehicles, they don’t have a phone, so we go and find them because they really don’t like asking for help. ”

“Sometimes when we arrive they need to talk so badly, all we can do is listen for as much time as they need. Some days that means we get to one property.”

Mr Williams said those in need of Vinnies’ help were coming from all age groups and demographics in the local community. “I met one lady, well into her 80s, who lost everything except her house, and she was desperately worried about her 1500 head of cattle,” he said.

“We almost had to beg her to accept more but she just wouldn’t.”

Mr Williams said the volunteers would keep going back until the job was done. “Disasters don’t just go away,” he said.

“We’re making sure people know we’re not going away. We’ll be there, no matter how long it takes.”

“A lot of the farmers have had to put people off because they just can’t afford to keep them,” Mrs Moffatt said. “We are helping a lot of farm workers and contractors, cooks, roustabouts, kangaroo shooters and those types of roles.”

The drought has had devastating consequences for Queensland farmers – many losing their wild stock.

“So many of them haven’t had any work for a while, as the number of sheep on properties has dropped dramatically because of drought, wild dogs and other factors,” Mrs Moffatt said.

“We have helped quite a few who have received some government funding but need extra help because of illnesses and those types of things that cause financial problems for them.”

“They are always most appreciative because with ill-health they’ve got to travel huge distances for appointments, all that is an added expense for them.

“If we can pay a bill for a farmer or contractor out of our fund – that has a two-fold effect because it helps the farmer as well as the local business community to keep going as well. ”

“To know that someone is there that can help them a bit means a lot to them. Someone to talk to or to visit them is a real relief to people.”

“Sometimes they are at the point where they just don’t know where to turn next.”

While they couldn’t make it rain, Mrs Moffatt said the assistance Vinnies provided helped people to keep fighting until the heavens open up once again.

“We’ve just been trying to help wherever we can – whether it’s drought assistance or through our normal emergency assistance, just doing what we can for people,” Mrs Moffatt said.

“When you can help the farmers, it is a big relief for them and their families, because they have no income, most of them have just about sold or lost all their stock completely now and they are just trying to keep a few stock alive to kick off again when it does rain.”

“Every day we just do what we can to help people cope. We are helping with rent, food, bill, insurances and more.”

“It’s been years since we’ve had any proper rain, it’s becoming a really hard battle at the moment, mentally and physically for people.”

“It is really taking its toll. They certainly do need help, that’s for sure.”

Donations to help Queenslanders affected by the devastating drought can be made via Vinnies’ website.